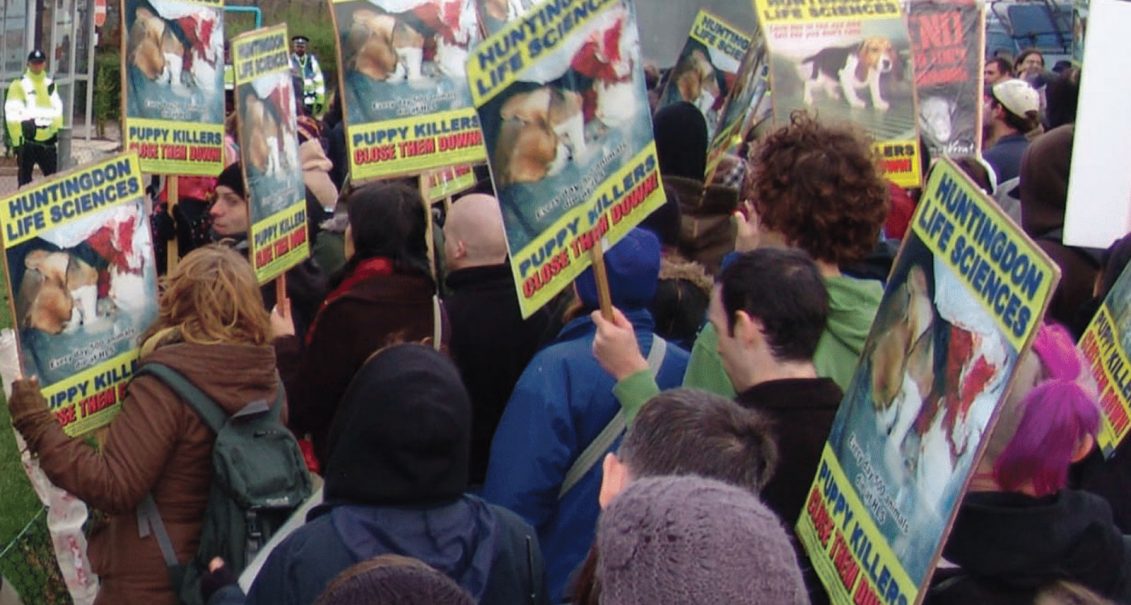 “I hesitate to call them activists; they are terrorists”

For over twelve years, my friends and I have been labelled as thugs, criminals and terrorists by the government and corporate media. Like in the USA, the government went after us for having exposed companies for dealing with HLS and for publishing their publicly available company information and encouraging others to take creative (lawful*) action to persuade them to sever their links to a lab that kills 500 animals every day.

The whole story of what happened to us seemed almost unbelievable to me, so how could I expect anyone else to believe it? For the longest time, it felt like there was no point in even trying to voice our side of the story because it seemed like no one would listen. That’s why I am so happy that The Animal People is finally telling a part of this story. Yes, it’s focused on what happened in the US, but the exact same happened to my friends and me in the UK. I am pleased that we finally have a documentary (produced by Joaquin Phoenix of all people) exposing how corporate interests were behind our imprisoning.

SHAC was a bold (but legal, above-ground) campaign to close down HLS. It operated internationally but was founded in the UK in 1999 after undercover video footage emerged showing horrific animal abuse from inside the labs. SHAC ran a tenacious and amazingly effective campaign that took the fight to the doorsteps of some of the most powerful people in the world, demanding they cease dealing with the laboratory.

SHAC made a lot of enemies. Multi-billion dollar pharmaceutical companies demanded the UK government take action against activists, threatening to pull out of the UK as some were “spending tens of millions of pounds” in extra security. The head of Britain’s largest pharmaceutical company, GlaxoSmithKline publicly demanded the government “do more with its police and judicial system” and Tony Blair responded by promising to do “everything possible”. In addition to private lobbying, the business community put forward £25 million in rewards for information leading to the convictions of activists.

Frightened of the economic impact the campaign was having, like in the USA, the British government decided to go after SHAC activists as terrorists and legislate against us. Remember, SHAC was an above-ground group that never condoned violence. The following are some quotes from British politicians in the houses of parliament about how to deal with SHAC:

“SHAC’s job is to drive the company out of business, and it has had a certain amount of success. Recently, it forced auditors—of all people—to quit the firm and ask that the contracts not be renewed, so its terroristic methods and behaviour are effective.” – Dr. Ian Gibson (Norwich, North)

“Animal terrorists are a tiny group, but they do immense damage. Everyone knows of the case of Huntingdon Life Sciences(…) It is disgraceful the way that the moment a few people appear with a few placards outside an office in the City, immediately the company caves in.” – Lord Taverne

“It is of the utmost importance that they should never succeed.” – Lord Jenkin of Roding

“If the activities of SHAC achieve their avowed purpose and drive these industries away from this country, not only would it do serious economic damage to the country…” – Lord Jenkin of Roding

“The situation is getting out of hand. What worries me is that, in relation to the importance of experiments on animals, and the awful way in which the animal liberation people behave, we do not have all the public on our side.” – Mr. Ian Taylor (Esher and Walton)

“The hon. Lady will understand, as we do, the complexity of dealing with the individuals involved in such activities. The fact is that the leaders behind them do not show their hand. There are midnight visits and people carry out the activities anonymously, so piecing things together and taking effective action against them is not easy, but we are trying to address that challenge.” – The Parliamentary Under-Secretary of State for the Home Department (Caroline Flint)

“The leaders of SHAC have not hidden themselves. I have quoted the names of two of them in my remarks. But they have been in receipt of very careful legal advice. They themselves take great care not to fall foul of the existing law. I ask again: will Clause 43 as drafted catch those who plan and organise collective harassment so that they will be found as much guilty of an offence as those who take part in the violent activity? If not, why not—or are we going to have to fall back on the notoriously difficult crime of criminal conspiracy in order to bring the leaders and instigators of such actions before the courts? This is a serious issue and I want a clear answer. It is something we have to deal with.” – Lord Jenkin of Roding

“In the US and Japan, which are our main competitors in many of the research, pharmaceutical and bioscience industries, the perception is that the UK does not treat the issue seriously enough and will not take substantive action.” – Mrs. Jacqui Lait (Beckenham) (Con)

“Specific legislation already exists in the United States, and seven members of SHAC – Stop Huntingdon Animal Cruelty, the group targeting HLS – USA were recently arrested and charged under that legislation. If is therefore clear that such legislation does work.” – Mrs. Jacqui Lait (Beckenham) (Con)

“Given the draconian powers and lengthy sentences that have been introduced to deal with the war against terror, I ask the Minister what makes animal terrorists different. Should they not also be charged under that legislation, making their sentences longer?” – Mrs. Jacqui Lait (Beckenham) (Con)

“If we look closely at the pharmaceutical research base in the UK, we find that it has shrunk during the last two decades. Jobs and companies have moved quietly away. The decision to move is a complex one, but one factor in the equation is undoubtedly the unpleasant environment created by animal extremists.” – Mrs. Jacqui Lait (Beckenham) (Con)

“Is she planning to change the law so that companies do not need to spend significant amounts to secure injunctions, in addition to extra security costs that run to millions of pounds and reduce the UK’s competitiveness as a location for biomedical research?” – Mrs. Jacqui Lait (Beckenham) (Con)

“We do not want bureaucracy to add to the pressure from animal activists to drive pharmaceutical companies to do their work abroad. In fact, many jobs in this country depend on the pharmaceutical industry, which is one of our most profitable, earning money for the general good of the country.” – Dr. Brian Iddon (Bolton, South-East)

“Those who would oppose the Bill will claim that adequate legislation already exists to deal with animal rights extremists. That is not the case.” – Lord Soulsby of Swaffham Prior

“Furthermore, not only are the extremists, who are really quite close to terrorists in the way in which they go about their business, a danger to society, they are a danger to the very animals for whom they purport to be acting.” – Lord Turnberg

“It is unlikely that this legislation will provide a definitive solution to the problem of animal rights extremism. I urge the Government to ensure that the police have sufficient resources to counter the threat and to work with the Crown Prosecution Service and the courts to keep the situation under review and to identify new initiatives as the extremists continue to evolve their activities, as I am sure they will.” – Lord Drayson

“Stop Huntingdon Animal Cruelty—SHAC—has demonstrated violently and with a degree of terrorism that has been noted by the Government and the Home Office.” – Dr. Ian Gibson (Norwich, North)

“I congratulate the Government on what they have done in dealing with animal terrorism. They have supported Huntingdon Life Sciences Company in every way necessary when all others have deserted it.” – Lord Lucas

“These people are organised and know exactly what they are doing.” – Dr. Ian Gibson (Norwich, North)

“I hesitate to call them activists; they are terrorists” – Mr. Roger Gale (North Thanet)”

*We had a disclaimer on our website and in our newsletters specifying to contact companies politely and lawfully but it seems that didn’t matter when corporate interests were affected.